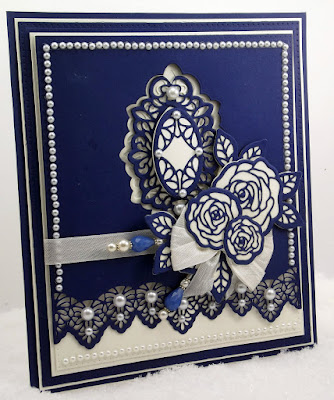 I hope some of you managed to catch Sue's shows on Hochanda over the weekend!  I was only able to catch the Friday night show and my record failed on my you view box so can't catch up!

I know the bundle contained the Zoe die and the roses I have used on this card as well as the Corvus mini triplet so I thought you might like a card that I made using these three!

I stared by cutting 2 of the pierced rectangles one in coconut white and one in cobalt blue so that I had 2 pieces the exact same size.  Next I cut the Corvus triplet die, with the bottom cutting edge in pace, across the bottom of the cobalt piece.  Next I cut the outline die form the Zoe die set for the centre top of the cobalt piece.  I also cut the filigree section out form the die cut piece as well 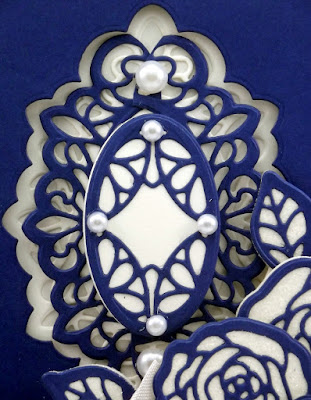 Next I cut the filigree section from the centre of the white piece making sure that the piece was cut at the same level of the cobalt die cut.  I placed the die cut back into the piece and stuck it down to the layer of white I placed underneath.  I then cut the blue filigree piece done the centre and foam mounted it, overlapping the 2 pieces to make them smaller, above the white piece.  I then cut the centre panel from the die in white and added the filigree centre panel in the cobalt on top before foam mounting this onto the card.  I had the overlap with a large stick on pearl and decorated the centre piece with smaller pearls. 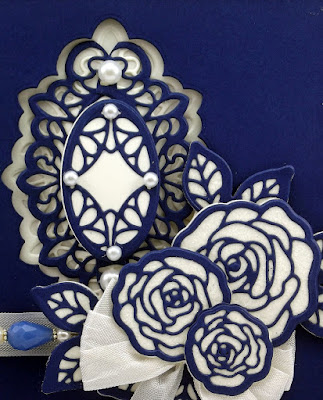 I then made a spray of roses by cutting the outline pieces of the rose set in coconut white that I had covered with double sided adhesive.  I then added cobalt blue pieces cut with the outline and the detail of the rises and foliage.  I added diamond snow over the exposed adhesive  and arranged these over a strip of ribbon I added to the front of the card.

A couple of stick pins and some heavy pearlage (new word I think) to the front to finish.  Hopefully an elegant card for any occasion and I have given those of you who indulged in the One Day Special a few ideas! 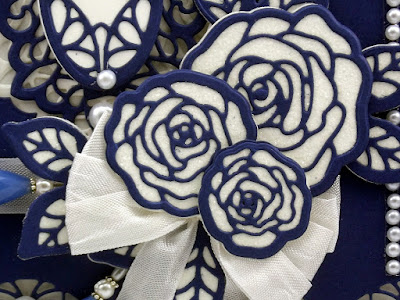 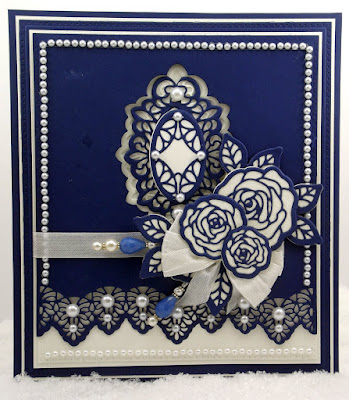