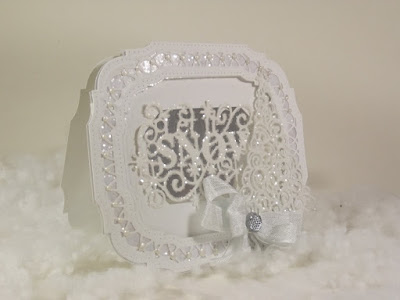 Its creative expressions design team day and as promised I made a version of the Ornate Noble pierced card from a couple of weeks ago as a Christmas card. 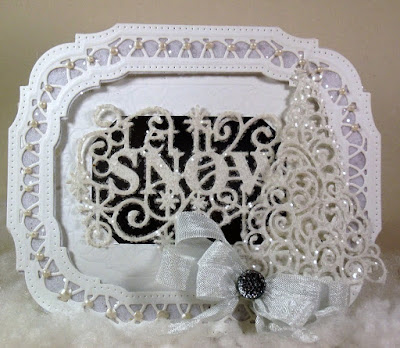 sheet of double sided adhesive.  I slipped the backing off and placed the filigree frame over this leaving the sticky showing through the filigree sections.  I then added iced snow and rubbed of the excess which leaves this glittered white on white finish.

I foam mounted the fame on and using the next die in the set, no 4, i cut out an aperture in the centre which I backed with heat resistant acetate (the heat resistant has the right stability for this).  Next I die cut the let it snow die using the piece of card form the centre of the frame that had the DS adhesive sheet on it, 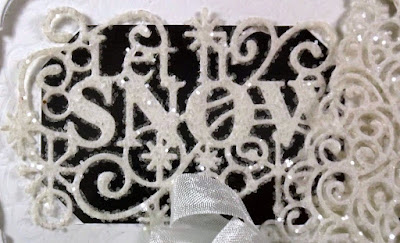 I removed the protective film and covered the whole sentiment in iced snow.  This was placed over the aperture and a piece of vintage silver foundation card was added on the inside back go the card so It frames and shines through the sentiment.

Finally I added a die cut of the illuminated three die again cut form card with adhesive sheet and covered in iced snow.  I placed PVA pearl dots, using cosmic pearl PVA, on all the junctions of the filigree frame and added a small white seam binding bow and silver dazzler to finish. 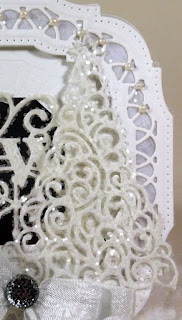 If you get chance pop over to the Creative Expressions blog and see what the rest of the team have come up with HERE!
Enjoy... 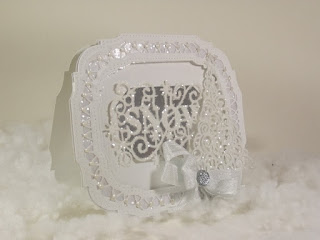